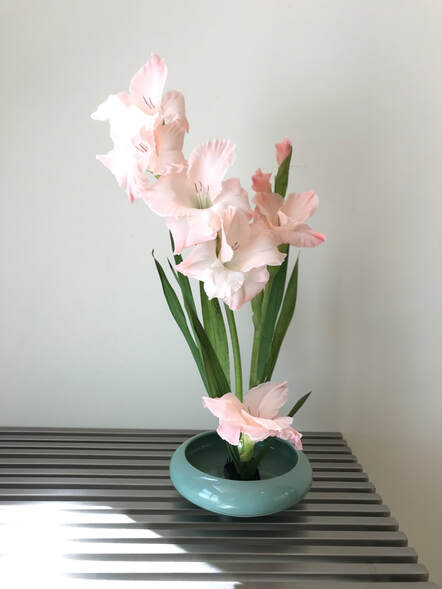 ​Mrs. Robert Mobley was impressed with the potential value of a local Ikebana chapter as a cultural asset to the community. There had been an interest in Japanese flower arranging over the previous years; the time was right for the formation of a chapter. In July 1967, the Richmond Times Dispatch published an article about Mrs. Francis Henggler, who had studied in the Sogetsu, Ikenobo, and Ichiyo schools. A telephone call to Mrs. Henggler from Mrs. Mobley, asking if she would be interested in helping organize a chapter of Ikebana International in Richmond, was received with an enthusiastic response.

On February 15, 1968, an organizational meeting was held. Constitution and bylaws were sent to Tokyo. An April meeting was held to elect officers, who were installed at a May 15, 1968 luncheon held at the Bull and Bear Club. During the first year of the chapter, 35 new members were added to the rolls.

On May 1,1986 the club was reorganized as Ikebana of Richmond with the primary goal of teaching Japanese flower arranging and other Japanese cultural activities.  Ikebana of Richmond's philanthropic efforts support the community and include annual contributions to Maymont and Lewis Ginter Botanical Garden.  The club has a full and rich history with a wonderful and diverse membership.  The total number of members in November 2012 was 166.